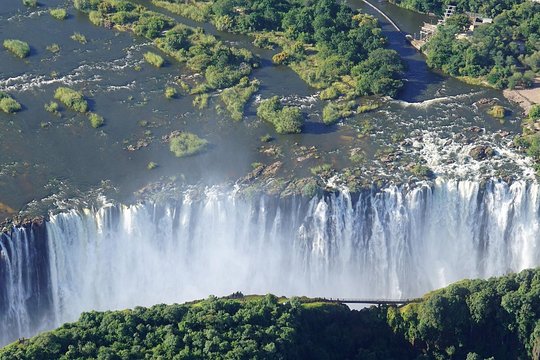 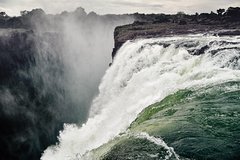 An amazing journey offering an entertaining & educational insight into the history, environment, geology and culture of the Victoria Falls.

An amazing journey offering an entertaining & educational insight into the history, environment, geology and culture of the Victoria Falls.

This is a typical itinerary for this product

The iconic Victoria Falls Bridge which adrenalin junkies throw themselves off was the brainchild of Cecil John Rhodes; the world-famous and quite controversial explorer. It was part of his grand but unfulfilled mission to construct a railway system that would link Cape Town in South Africa with Cairo in Egypt. Rhodes never visited Victoria Falls and died before construction of the bridge started. Originally known as the Great Zambezi Bridge, it was renamed Victoria Falls Bridge. It was designed by George Andrew Hobson and assisted by Ralph Freeman on stress calculations. Freeman went on to be the principle designer of the Sydney Harbour Bridge. The Victoria Falls Bridge was prefabricated in England by the Cleveland Bridge & Engineering Company and then shipped to the Mozambique port of Beira. It was transported to Victoria Falls on a newly-constructed railway line and it took 14 months to construct. Victoria Bridge was officially opened by Professor George Darwin, the son of Charles Darwin, and opened to the public in 1905. The iconic bridge is 198 metres long with a main arch spanning some 156 metres at a height of 128 metres above the lower water mark in the gorge below. The bridge carries a road, railway line and a footway. It’s the only rail link between Zambia and Zimbabwe, and one of only three road links between the two countries. Freight trains have historically carried copper ore and timber out of Zambia and coal into Zambia. The iconic bridge is now a major attraction at Victoria Falls. Don’t miss out on a historical guided tour which promises fascinating information about its constructions. There’s also a small museum on the Zambian side. When that’s done, you have the choice of bungee jumping, gorge swinging or ziplining from the bridge.

The Victoria Falls Rainforest is the dense woodland area that flanks the edge of the falls and is nourished by the constant spray from the waterfall. The lush vegetation receives what appears to be constant rain as the tumbling water sends up a spray of water which is buffeted upwards and spreads as small water droplets across the green belt. The result is an incredible eco-zone which supports a variety of insects, amphibians, birds and mammals. In ecological terms, it is not a proper rainforest but rather an elevated extension of the natural river bank. It’s really a riverine fringe; only located some 110 metres above the river bed. The tour operators at Vic Falls coined it a rainforest years ago, mostly because you need a rain jacket to walk through the forest or else you’ll get soaking wet.